Staff member
#1
It is common practice to sum up the results of the year when it comes to an end.
So we have decided to speak about changes in ReCaptcha we noticed this year and what do we expect in the future.

Is Google ReCaptcha changed? I didn't notice any changes!
Yes, in fact ReCaptcha changes very often and these changes are making really hard time for captcha solving services. Google has this idea to increase the cost of captcha solving up to $7-$10 per 1000 captchas; same way they were trying to keep the cost of Gmail account above $0.5. This year we were able to keep our rate at the same level it was - $2.99 per 1000, but you never know how long we could keep it.

Winter 2017-2018. Try again later
Let's start from the end of 2017. At that time Google started to fight hard with captcha solving services blocking suspicious IP addresses. When user tried to load ReCaptcha he received this message: "Try again later. Your computer or network may be sending automated queries. To protect our users, we can't process your request right now." 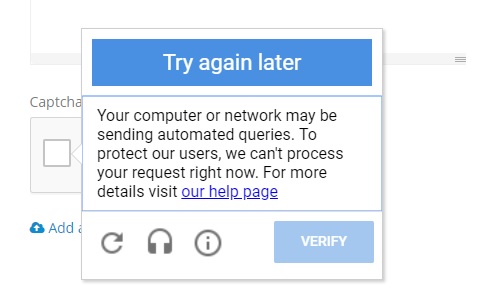 Some day 70% of our workers were unable to work from their IP addresses and proxy servers got banned within few hours. At the time we survived only because of our agreement with a big proxy provider so we were able to use all their IP pool but with limited number of threads. On January 2018 Google stopped mass bans probably due to lots of complains from normal users who don't use any captcha solving services but still receives "Try again later..." messages.

July. incorrect-captcha-sol
In July Google implemented new strange algorithm that at first looked as a bug. Now Google started to mark IP addresses and user cookies as "spam", so when suffered user tried to pass the challenge verification sometimes the websites receives incorrect-captcha-sol from Google. We even posted an article about that: https://2captcha.com/blog/google-doesnt-accept-recaptcha-answers. Of course lots of our workers were marked by Google as "spam" and answers provided by these workers were not accepted. We have implemented token verification system and started to spend additional funds so we could regularly check our workers to identify bad cookies and IP addresses to keep the solving percentage, we have also managed to keep the rate for our customers on the same level. The main problem of that ReCaptcha algorithm was that if IP address or user's cookies were marked once as "spam" there was no way to make it good again. As a result about 10% of IP addresses were marked as "spam" each day. In September Google stopped to provide incorrect-captcha-sol for cookies marked as "spam" and then in October Google unbanned almost all bad IP addresses and the percentage of blocked IP decreased from 10% to 2%.

September. 100% CPU usage
One more strange update that affected lots of normal users. JS-script that generates ReCaptcha was made syntetically heavy. It started to reexecute many actions few times which resulted in high CPU load on the computer when rendering ReCaptcha. Our workers with slow computers were massively affected with that as our software started to crash when tried to load two ReCaptchas at the same time. Normal users were affected too, but many of them haven't noticed the fact of CPU load increase during ReCaptcha rendering in browsers. In November Google cleaned JS code and CPU usage returned to normal values.

What do we expect in 2019
Unfortunately we still have lots of weak spots. Of course we are not going into details about it. But we can surely say that Google will continue to make deep data analysis of profiles to block automated solutions and try to separate it from regular web users and all of that will once again affect all of captcha solving services.

P.S. If you are interested we may also write an article about changes in Google ReCaptcha before 2018 but without actual dates as it's hard to remember it all.
Last edited: Dec 26, 2018
S

#2
What can I do with this error message from Google when submitting your ReCaptcha answer "You must pass the reCAPTCHA verification to proceed. Please try again"? This problem happened from August and since then I haven't pass any single ReCaptcha from your service.
You must log in or register to reply here.
Share: Facebook Twitter Google+ Reddit Pinterest Tumblr WhatsApp Email Link